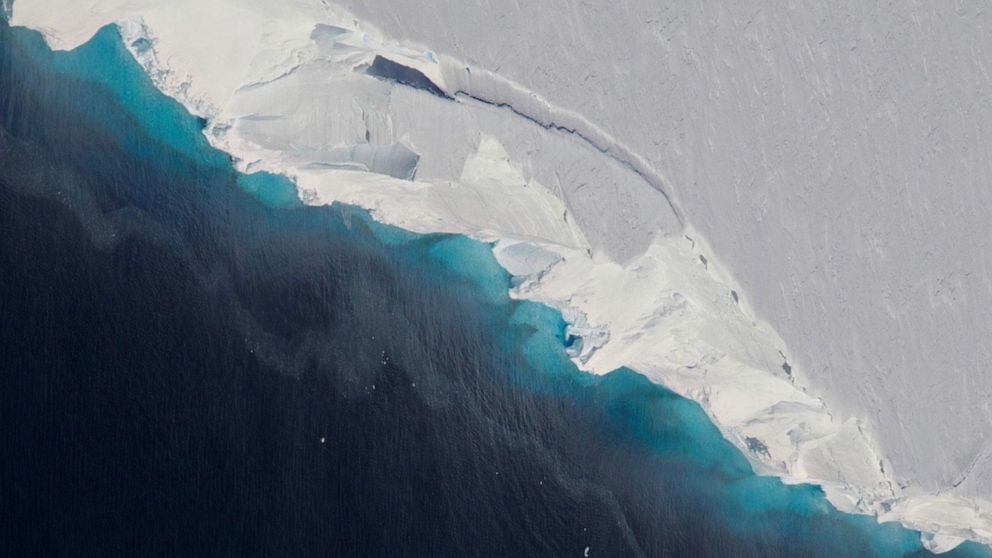 One of Antarctica’s most important glaciers is holding on “by its fingernails” as warming temperatures around the globe threaten to cause further deterioration, which could then destabilize the glaciers in the entire region.

Now, scientists are finding that the Thwaites glacier, also known as the “Doomsday glacier,” is melting faster than previously thought as warm and dense deep water delivers heat to the present-day ice-shelf cavity and melts its ice shelves from below, according to a study published in Nature Geoscience on Monday.

Thwaites, which is about the size of Florida, has been known to be on a fast retreat. But researchers from the University of South Florida’s College of Marine Science and the British Antarctic Survey mapped a critical area of ​​the seafloor in front of the glacier that could contribute to faster melting in the future.

satellite imaging released in 2020 of Pine Island and Thwaites glaciers, which are located next to each other, showed highly crevassed areas and open fractures — both signs that the shear zones on both glaciers, where the ice shelf is thin, had structurally weakened over the past decade.

But scientists have now discovered that the retreat from the grounding zone of Thwaites glacier is closer to more than 2.1 kilometers per year — twice the rate observed by satellite imagery at the fastest-retreating part of the grounding between 2011 and 2019, according to the study.

The researchers documented more than 160 parallel ridges that have been created as a result of the glacier’s leading edge retreating and bobbing up and down with the daily tides. In addition, the scientists analyzed the rib-like formations submerged about a half of a mile beneath the ocean, determining that each new rib was likely formed over a single day.

Large calving events, when a large piece breaks off, occurred on Thwaites in October 2018 and February 2020, when an unprecedented retreat of the ice shelf occurred. The feedback process, likely triggered by new damage to the ice shelf, resulted in ice shelves being preconditioned for further disintegration and large calving events.

In December, researchers at the University of Colorado Boulder predicted that Thwaites will last only a few more years before it collapses.

“Thwaites is really holding on today by its fingernails, and we should expect to see big changes over small timescales in the future – even from one year to the next – once the glacier retreats beyond a shallow ridge in its bed,” said Robert Larter , a British Antarctic Survey marine geophysicist and a co-author of the study, in a statement.

Researchers from the US, the UK and Sweden used a state-of-the-art robotic vehicle loaded with imaging sensors, nicknamed “Ran,” to collect the imagery and supporting geophysical data, described by Anna Wahlin, a physical oceanographer from the University of Gothenburg, as “a pioneering study of the ocean floor.”

“The images Ran collected give us vital insights into the processes happening at the critical junction between the glacier and the ocean today,” Wahlin said.