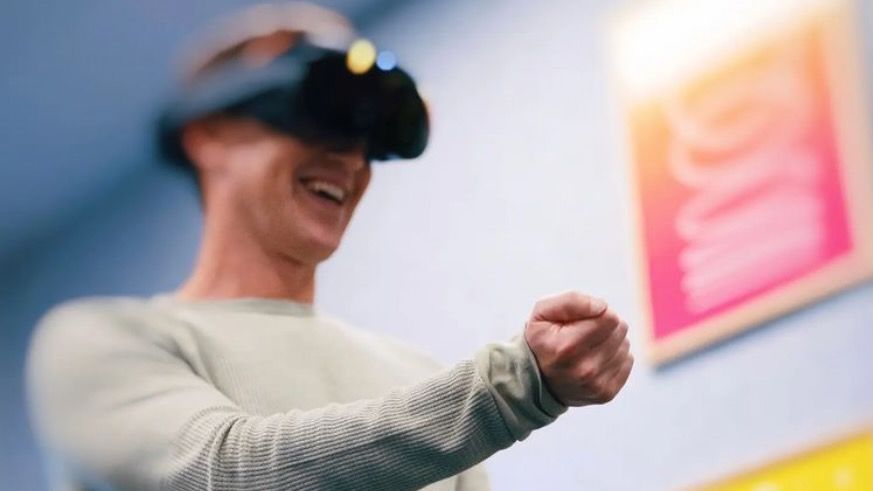 The Apple iPhone 14 event unveiled three new Apple Watches, four new iPhones, and new AirPods Pro. Squeezing in an Apple VR reveal would’ve only made an overlong livestream even more protracted, as well as overshadowed its other products.

But I still held out hope that Tim Cook had a “one-more-thing” up his sleeve after the Apple Reality Pro (opens in new tab) prototype leaked a few days before the event. Instead, we got a creepy, reality-warping teaser for Severance season 2 on Apple TV+, and I got my coworker Jerry Hildenbrand laughing at me in Slack that “Apple doesn’t give a sh*t about VR.”

I respectfully disagree with Jerry’s stupid-a** hot take (love you, Jerry). Apple has three mixed-reality headsets in development, and it will try to dominate the VR space as it has with other product categories. But in the short term, Apple’s rumored last 2022 event (opens in new tab) will likely focus on Macs, iPads, and HomePods, which means we probably won’t see an Apple VR headset until next spring at the earliest.

And for current VR brands, this half-year of breathing room will be vital for establishing a foothold that Apple can’t break. Especially with new headsets like the Meta Quest Pro and Pico 4 Pro expected to arrive soon.

Due out in October, the Meta Quest Pro will be Zuckerberg’s attempt at a “laptop for your face,” with 12GB of RAM and an alleged price tag of $1,500. Unlike the gaming-focused Quest 2, the Quest Pro is truly meant for “professionals” who want to work in virtual reality, even if it’ll support Quest 2 games.

The issue for Meta is that it doesn’t have its own proper OS; the Quest Pro’s mobile Snapdragon XR2 chip runs Android, but the headset will likely use browser-based software instead of actual apps, which makes it pretty limited for productivity. Compare that to the Reality Pro, which’ll apparently have an M1 Pro chip meant for laptops and the benefit of macOS’ native software, making it more likely to run tools like the Adobe Suite or Google Drive apps without any slowdown.

Meta hopes to sell a couple million Quest Pros to jump-start its Metaverse ambitions, but if people knew they could get an current “VR laptop” from Apple instead, that would seriously undercut its business. Yes, the Reality Pro could cost twice as much (opens in new tab) at $3,000 according to leaks, but that’ll still tempt the Quest Pro’s target audience of wealthy VR superfans who want something they can wear eight hours a day for work, in addition to gaming.

I don’t think Apple’s second leaked prototype, the Reality One headset designed for “entry-level VR,” can match the future Quest 3 for gaming excellence, given Apple’s history. But for premium productivity, Apple would have the advantage.

Then you have the Pico 4 Pro. Owned by ByteDance, the Chinese company behind viral app TikTok, Pico makes wireless VR headsets with remarkably similar specs and design to the Quest 2 lineup. Up until now, it mainly sold in China, with limited sales in Europe. However, UploadVR (opens in new tab) reports it will launch the Pico 4 worldwide this September, with an “aggressive subsidy strategy” to make its price more attractive than the Quest 2.

After avoiding a direct confrontation with Meta for years, Pico is ready to shoot his shot and try to gain global brand awareness with VR gamers. Right now, the free-for-all VR market will accommodate new players who are willing to spend money to make money. But once Apple launches its entry-level Reality One VR headset, that could change.

The Pico brand will compete with Meta in the affordable VR gaming space, and has a chance to resonate with TikTok users if it brings the app to VR — despite TikTok’s recent data breach. But I guarantee that if Pico had launched in North America despues de Apple had announced its own headset, it wouldn’t have had a chance to make a real impression, regardless of how many VR games Reality Pro supports.

Honestly, the same applies to how Pico is beating the upcoming PSVR2 and Valve Deckard headsets to the punch, too. It’s taking advantage of the calm before the storm brewing for 2023, grabbing attention while it can.

We don’t know exactly why the Apple VR headset has taken so long to arrive. The latest rumor is that it’ll ship in February 2023 (opens in new tab), but it could very easily take longer. Mainly because Apple has no reason to rush.

Past rumors of Reality Pro hardware issues include “challenges related to overheating, cameras and software” and “continuing challenges with its battery power.” Putting a laptop-quality chip inside something light enough to sit on your head for hours isn’t easy.

Because there aren’t many “pro-level” VR devices yet, Apple can take its time to solve these issues and still have the promise of market success once it launches.

Until then, the Meta Quest Pro and other devices will only benefit from its absence and lack of competition — and so will consumers. Once it does consolidate the market, it’ll make it that much harder for smaller brands to break into the ecosystem.