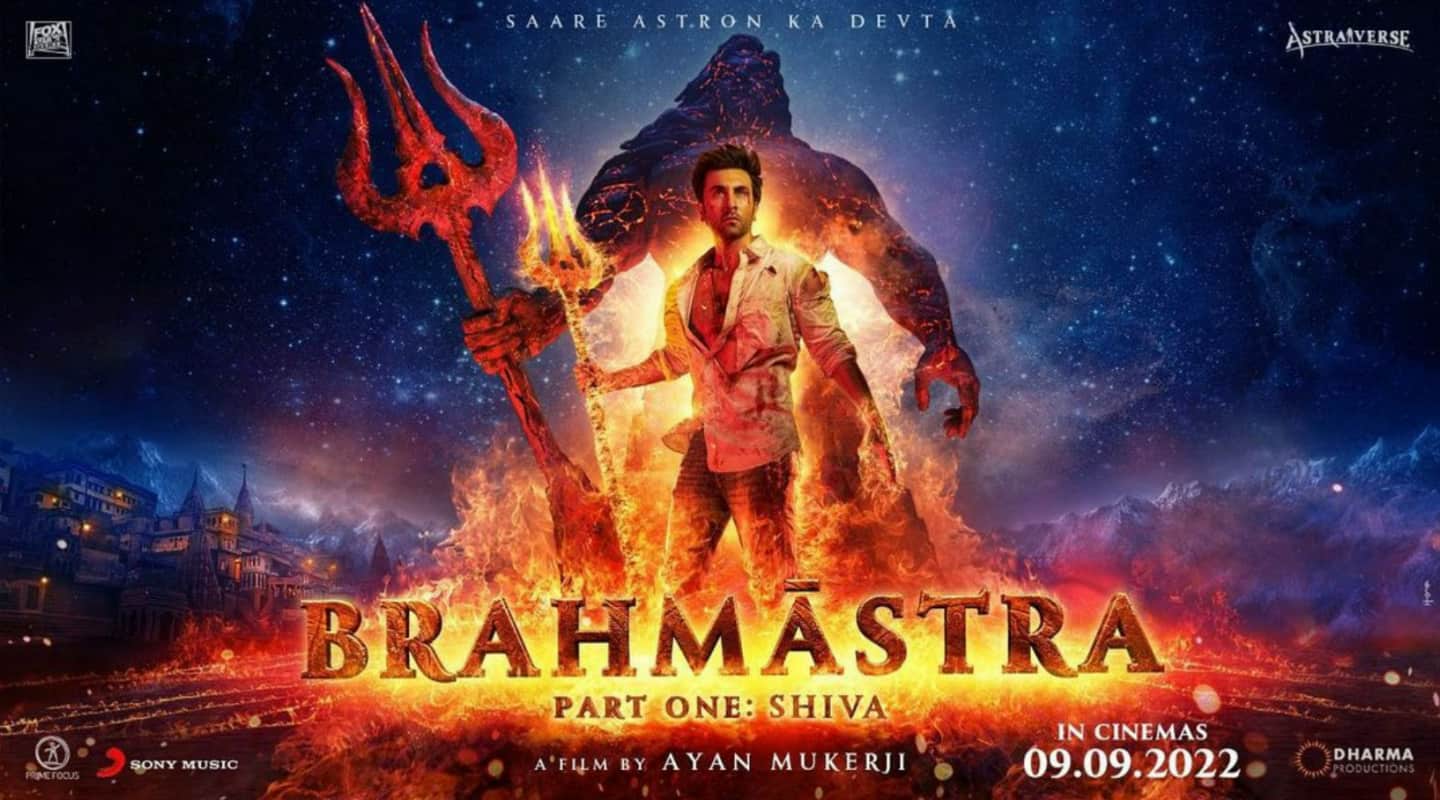 When was the last time a Hindi film arrived in theaters with the burden of an entire industry–its future films, decisions and significance–riding on it? Brahmastra, actors Ranbir Kapoor-Alia Bhatt‘s latest big scale fantasy epic, will land in cinemas this Friday with an unprecedented weight on its VFX heavy shoulders.

For a film which aims to dig deep into Indian mythology, showing several characters possessing all kinds of astras (supernatural weapons), the biggest power Brahmastra holds for Bollywood is the one which it was oblivious to all throughout its making: The Revival Astra.

“With the kind of advance booking it has picked up, the excitement that is suddenly around, Brahmastra is like oxygen to the industry,” filmmaker Milap Zaveri tells indianexpress.com.

all about the timing

When it was first announced in 2014, filmmaker Ayan Mukerji’s film–then tentatively titled Dragon– was a mammoth project, but never the kind whose box office prospects would be keenly awaited by trade critics, film studios, producers, directors and strangely, Twitter trolls .

Brahmastra, in every sense of movie business, is the biggest release for the Hindi film industry. The Ayan Mukerji directorial, backed by Dharma Productions, Starlight Pictures, and Prime Focus in association with Star Studios, is set to open in around 5,000 screens in India and 3,000 screens internationally.

There is a lot to prove, that Bollywood can succeed with the right film despite negativityand a lot to remind its loyal ticket-buying audience, that the magic of movies is still full of wonder.

It is releasing in a year where only three Bollywood films have worked so far– Bhool Bhulaiyaa 2, Gangubai Kathiawadi and The Kashmir Files–while most have faced intense online negativity as part of the ‘Boycott Bollywood’ campaign. All eyes and hashtags are naturally on the film.

Film trade analyst Komal Nahta tells indianexpress.com that there is “immense pressure” on Brahmastra to put up numbers at the box office.”The situation is that people feel ‘Oh Bollywood films are not working’. Brahmastra is certainly releasing not in a happy climate. Films are not working because suddenly filmmakers seem to be getting it wrong, not because of any other reason.

“Once in 10-15 years, there comes a time when the audience demands a change, they don’t want any run of the mill story. When it happens, the industry is jolted, it doesn’t know what to do, where to go, what to do. In that sense, the pressure on the film is tremendous,” Nahta says.

Until the makers teased the chartbuster Kesariya days ahead of Ranbir and Alia’s wedding in April, there existed massive skepticism around Brahmastra due to numerous delays and reshoots, making people wonder if the film would ever see the light of day. The Kesariya teaser, followed by Brahmastra trailer release in June, however, turned people hopeful.

Then Pritam’s rest of the soundtrack brought in excitement, which reached its crescendo last week when the makers started dropping mini visual units.

But when the team launched its second, special trailer to announce the opening of advance bookings on Saturday, the result, for many, was shocking. According to trade observer Himesh Mankad, Brahmastra managed to sell more than one lakh tickets within four days, with only 3D shows open to bookings.

To put the numbers in perspective, the advance booking count of Ranveer Singh‘s cricket drama 83 was at 1.17 lakh tickets, while SS Rajamouli’s epic RRR was at 1.05 lakh and Bhool Bhulaiyaa 2 was at 1.03 lakh. The film is now only behind KGF Chapter 2, which comfortably sits at top spot of ticket sales at 4.11 lakh.

“The excitement is insane. The advance booking is extraordinary, and it is competing with Sanju, Ranbir’s highest opener (Rs 34.75 cr). Post-pandemic, no film has registered these numbers except for KGF 2 which was a sequel to a successful, loved film. So what Brahmastra is witnessing, it is truly heartening,” Milap Zaveri says.

Eyes on you, Brahmastra

A table at a cafe in mumbai‘s Versova–dotted with boutique production companies, casting agents office and houses of several artistes of different hierarchies in Bollywood–is the center of a raging debate. A group of writers and aspiring actors are predicting the opening day figures of Brahmastra and, in a tone dripping of worry, contemplating the future of films and their own career.

A source tells indianexpress.com that if Brahmastra works, it will empower artists will get paid their worth. If it doesn’t, there will be a ripple effect, adding to the doomsday that the industry is already halfway through.

“There is a paucity of cash inflow in the industry, as a result of which budgets are getting slashed across- from writing, acting, shooting. Once these releases, it will compensate for all the negativity thrown at the industry and the narrative that none of the Hindi films are working on.

“It is important for all of us to not just get work, but also to get the money we were negotiating. A film flopping means you earn less. That’s why there is a lot of anxiety and nervousness to see how this one fares” the source adds, explaining the trickle down effect.

According to multiple well-placed sources in the industry, the fate of more than a dozen films lies on how Brahmastra is received by the audience. Dreams can be brought to life or shelved this Friday.

“The situation is dire in the industry. With virtually nothing working, everything truly depends on Brahmastra. If the big films had worked, say Aamir Khan‘s Laal Singh Chaddha, akshay kumar‘s Samrat Prithviraj or even Ranbir Kapoor’s Shamshera, the pressure would have been normal.

“But not today. There are massive budget cuts across production houses, and everyone is just too scared to start anything risky. In fact, a dozen small to mid-sized films have paused their theatrical release to see how Brahmastra does. Otherwise, all will head to OTT,” an industry insider says.

There is also a slate of films whose production depends on Brahmastra. “Vicky’s big scale film The Immortal Ashwatthama was shelved due to the pandemic and the uncertainty of reviving the cost of production. But that can definitely change if Brahmastra clicks.

“And if the film does end up doing well, it will only empower other production houses to restart their high on VFX films. There are at least two-three films in the genre waiting in line to be green-lit. If big films find their way to production, it will obviously lead to smaller films for theatrical also getting that necessary push. It is a chain and Brahmastra is the start of it,” another source adds.

Filmmaker Milap Zaveri, who has mounted masala films like the Satyameva Jayate franchise and Marjaavaan, says everyone in Bollywood knows the significance of Brahmastra. Simply put, the filmmaker says, Brahmastra has “pumped life in an industry” for which the last few months and years “have been tough.”

“For the Hindi film industry, the success of Brahmastra is important. It is India’s biggest film, made on a big scale. It is a labor of love of the whole crew. They embarked on the journey almost 8 years ago and it is incredible the kind of patience and vision Ayan Mukerji had to pull this off.

“I have never seen the entire industry so upbeat, so positive. Everyone wants the film to succeed. There is not a single person who does not want it to do well. The industry is hoping it is a great film,” Zaveri adds.

The number game and the crown of pan-India

Brahmastra, beyond the big screen exploration of Indian mythology, is also a project of numbers, which are being quoted by fans, trade and industry. Roughly 3000 days in the making, opening in close to 8000 screens, with a prediction of more than Rs 25 cr day one after a total advance booking of nearly two lakhs.

But one number which has cropped up repeatedly in the run-up to the film’s release, is its budget, estimated to be a whopping Rs 400 cr, making it one of the costliest Indian films to have been mounted. But Komal Nahta insists, while the numbers add to the pressure, one should look at them in the context of Brahmastra’s ambitious, three-part universe.

Nahta says the makers aren’t foolish to invest a heavy amount with the hope to recover everything from just one film. “If that happens, great, even if it doesn’t happen, it is not a point of despair because, after all, it is a trilogy and a whole new universe. Trilogy will happen, but its success can empower makers to mount more films within the universe, like Marvel does.

“So, it is not like Rs 400 cr should be recovered from this part, no. They are not even expecting that, because part of the budget is an investment for the entire universe, which will be carried forward in the second, third part of the franchise.”

One of the ways the makers are hoping to reach as close to the budget–if not cross it–is by giving the film, a wide, pan-India mounting. Since Telugu actioners Pushpa and RRR along with Kannada blockbuster KGF Chapter 2 clocked in impressive collections in Hindi, pan-India has become the buzzword in the industry. And Brahmastra is hoping to cash in on that.

Apart from Hindi, Brahmastra will be released in Tamil, Telugu, Kannada and Malayalam. Filmmaker SS Rajamouli is on board as presenter for the south region. The film also stars Nagarjuna in a key role, which the makers would hope translates to footfalls of the South star’s fans. According to sources close to the film, plans are already in place to make the presence of South stars stronger in upcoming parts.

“The film is so expansive and massive, so costly and ambitious, that it cannot be contained to just Hindi film stars. They will add more known faces from Tamil, Telugu, Kannada and Malayalam going forward so that the film reaches a wider audience base,” the source adds.

With the film opening on 8000 screens worldwide, trade sources say the film is poised to take a “surprising, respectable” opening and will then depend on word of mouth.

Unlike other Bollywood releases which attempted to go pan-India this year, like Laal Singh Chaddha and Shamshera (both also released in Tamil and Telugu), Brahmastra has comfortably positioned itself as an exciting film which promises an unmissable cinematic experience.

“Even the songs of the film in various languages, especially Kesariya, was the perfect crossover. None of the other Hindi films had that and hence were only driven by star power. But in territories which are not predominantly yours, you need films to be bigger than your faces. Brahmastra scores on that front too,” a trade source says.

“The team also promoted their film heavily in South. The big fan event with Jr NTR, even if it didn’t pan out the way they had intended, worked in their favor as that will certainly increase the first day sales of tickets. If a Rajamouli backs your film, Jr NTR pushes you, that certainly makes a big difference,” the source adds.

The trade is optimistic that the film will score in the Southern region but says an estimated day one figure will only become clear nearer the release. Depending on where the film goes, Bollywood will finally be able to crack the pan-India model, which is of making the “right” film go wide and give it “necessary push”, instead of surface level tag.

For now, everything, every decision and every number crunching is being done with crossed fingers and a silent prayer. The solid buzz of Brahmastra, if the film lands well, will directly empower all other releases, including the next biggie, Vikram Vedha, starring Hrithik Roshan and Saif Ali Khan.

“I hope Brahmastra is that spark that ignites this wave. I hope this trend continues with all the other films lined up for releases, right up to Pathaan, which I think will be another historic opener as the entire world is waiting for Shah Rukh Khan sir to make his comeback,” Milap Zaveri signs off.