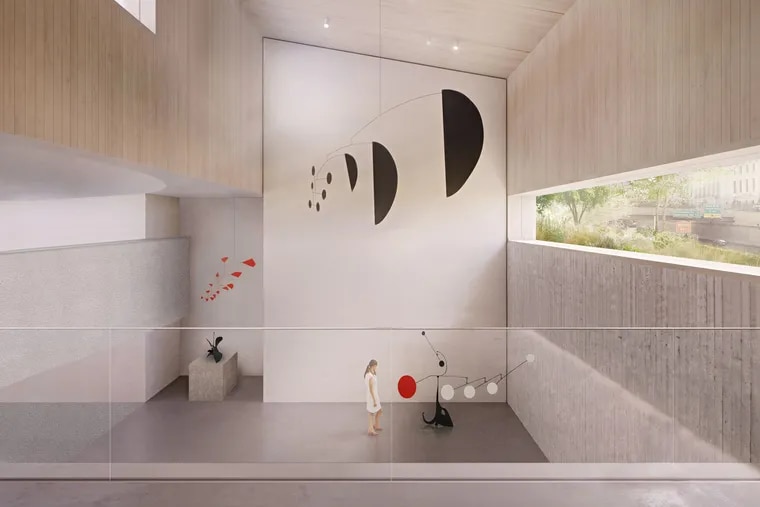 When an Alexander Calder museum was first proposed for the Benjamin Franklin Parkway by Philadelphia Mayor Edward G. Rendell, the Youth Study Center, a detention facility, was across the street and the Barnes Foundation was in Merion, Montgomery County.

It was 1998, exactly 100 years after Calder, the prominent sculptor and artist, was born in Philadelphia. Rendell pitched a museum in his honor from him to the Calder Foundationa New York City-based family operation run by Calder’s grandson Alexander SC Rower (known as “Sandy,” like his grandfather).

Rower had been trying to cut a museum deal with Rudy Giuliani, then mayor of New York, and was not making much of a headway. But Philadelphia, which already prominently displayed the artwork of three generations of Calders (including Sandy), was pushing hard — part of Rendell’s big plans for the cultural and economic makeover of the old city.

Team Rendell swayed Rower. Calder would come to the city.

This being Philadelphia, the deal bogged down. Many different players, not enough consensus. In 2005, when Rendell was governor, the deal was pronounced dead.

But this being Philadelphia, nothing is ever too long in the making, and what is pronounced dead is never forgotten. This is a Philadelphia comeback story.

In 2020, with virtually all of the original players no longer on the field, a completely reconfigured Calder showcase was announced and was promptly delayed by the pandemic. But the plan, dubbed “Calder Gardens” — more of a diminutive sculpture garden, about 17,000 to 18,000 square feet of exhibit space, than a museum — is going before the Philadelphia Art Commission on Sept. 14. The plan becomes public today, part of the package submitted to the Art Commission.

And, of course, this being Philadelphia, HF “Gerry” Lenfest was in the thick of the resurrection effort before his death in 2018. He called up Rower and Joe Neubauer, trustee of the Neubauer Family Foundation. (Lenfest was a former owner of The Inquirer, and the paper receives support from the Lenfest Institute for Journalism.)

Neubauer, a trustee and driving force behind the Barnes Foundation since 2005, said he did not have to be pushed into seeking to bring the Calder project back to life on the Parkway.

“Gerry was a man of many wishes,” said Neubauer — and this one was within the realm of the possible.

“We love Philadelphia,” Neubauer said. “We’ve lived here for over 40 years. We love the Parkway, and we think we have added significantly to it with the Barnes.”

“Art is important in our culture, especially in troubled times,” Neubauer said. But, he added, “I hated the ugly empty space that the city or the state or I don’t know who” piled high with construction materials between 21st and 22nd Streets, directly across the street from the Barnes and the Rodin Museum.

» READ MORE: A luminous art space dedicated to Alexander Calder’s work will rise on the Parkway at long last

It was actually PennDot construction material stored on the very two-acre spit of Parkway land that the city had agreed to lease to the Calder Foundation for a “museum” two decades ago — a facility that Neubauer recognized as the missing “completion piece” of the Parkway’s cultural profile.

“When Gerry Lenfest and Rebecca Mascara [head of the Pew Charitable Trusts] and I started talking about the Calder project, I got very interested,” Neubauer said. “I don’t know what happened 20 years ago, and I’m not interested in that. But we reached an agreement, an arrangement with the Calder Foundation to lend us art for a period of 99 years on a rotating basis. And that’s what is going to happen in this building.”

If the Art Commission approves the project — and all indications are that it will — construction could begin as early as this fall and last about two years to 2024, or possibly into 2025.

The architectural firm of Herzog & de Meuronbased in Basel, Switzerland, and known for the Tate Modern in London, the Beijing National Stadium (the so-called Bird’s Nest), and, closer to Philadelphia, the Parrish Art Museum in the Hamptons on Long Island, has largely completed its design work.

Neubauer said about 90% of the projected $70 million cost of the project (which includes a “substantial” endowment) has been raised.

The architects, led by Jacques Herzog, conceived a long, low structure with multiple levels leading to or looking out on gardenesque spaces. The building backs onto the Vine Street Expressway and presents a soft steel facade toward the Parkway, appearing to rise from gardens designed by the Dutch landscape architect Piet Oudolf.

The art, both within interior gallery areas, and in the outdoor garden spaces, will consist of Calder’s characteristic ingenious hanging mobiles and stationary sculptures, what the artist called “stabiles.”

The Calder Foundation holds hundreds of works, which it lends for exhibits or retains in the artist’s old Roxbury, Conn., studio and back field, and at other locations.

The Philadelphia Museum of Art boasts Sandy Calder’s own monumental Ghost mobile in the Great Stair Hall looking out over the length of the Parkway past the work of his father’s Swann Fountain to his grandfather’s William Penn and other City Hall sculptural groupings a mile away.

There will also be some two- and three-dimensional works by Milne and Stirling on display in the new showcase, Rower said.

“Oh, it took too long, without question, but it was difficult to put the pieces together,” said Rendell, the man who put Calder in play two decades ago. “I think it’ll be a terrific thing for the city. The Calder museum belongs to Philadelphia. This is a city that has more Calders than the rest of the country put together. And Calder was a great artist and his work by him should be given the visibility that it deserves.

» READ MORE: Where to find 10 extraordinary artworks by the Calder family on display in Philadelphia

Rower and Neubauer said the number of artworks that will be displayed in Calder Gardens has not been determined, and given the wide range of size of artworks, the numbers on view at any given time will fluctuate. But the foundation has many hundreds if not thousands of Calder mobiles, stabilizes, and two-dimensional works that would contribute to the Gardens for exhibition, Rower said.

“It’s the first time there’s a purpose-built space for Calder,” Rower said. “I want it to be small. I don’t want it to be some big, overburdened place.”

Rower’s idea was not to use the foundation’s holdings to stock a museum but rather to present art for contemplation. He wanted an unmediated experience between viewer and artwork.

Herzog said that after much consideration, “we wanted to do something that doesn’t present itself as a form or as a color, because Calder is so much about form and color.” The decision was made to place much of Calder Gardens’ public spaces—including gardens—below ground level.

Visitors, he said, “would walk down and discover the work in a spatial sequence that they have not seen before.”

Calder Gardens, Herzog said, is “a place of meditation. There is a great word. meditation. But you know, concentration, discovering, being curious.” Visitors will “perceive art in a new way, and that was actually driving the design.”

Rower said he wanted a place that was “open for all” to have a “spiritual personal dialogue with Calder’s work in pure sense.” What he called “a pure activation between Calder and you with nothing in between, you know. No wall label, no curator just you and Calder and his work from him.”

Also, on a practical level, Rower thought a smaller facility would be easier to manage. In fact, the back-office operations of Calder Gardens will be handled by the Barnes Foundation across the street, freeing up the Calder to focus on presenting art. Details of the Barnes arrangement have not been worked out yet, Neubauer said.

“I want it to be able to survive through thick and thin, you know,” Rower said. “Right now we’ve got these wonderful funders and everything, but in 50 years, what’s going to happen? And I can’t have it end up as a kind of dead place. That would be horrible. I don’t want that to happen. So I want to kind of look ahead of that to make sure that it survives and it’s vibrant, and it has this kind of aliveness to it like Grandpa’s work.”