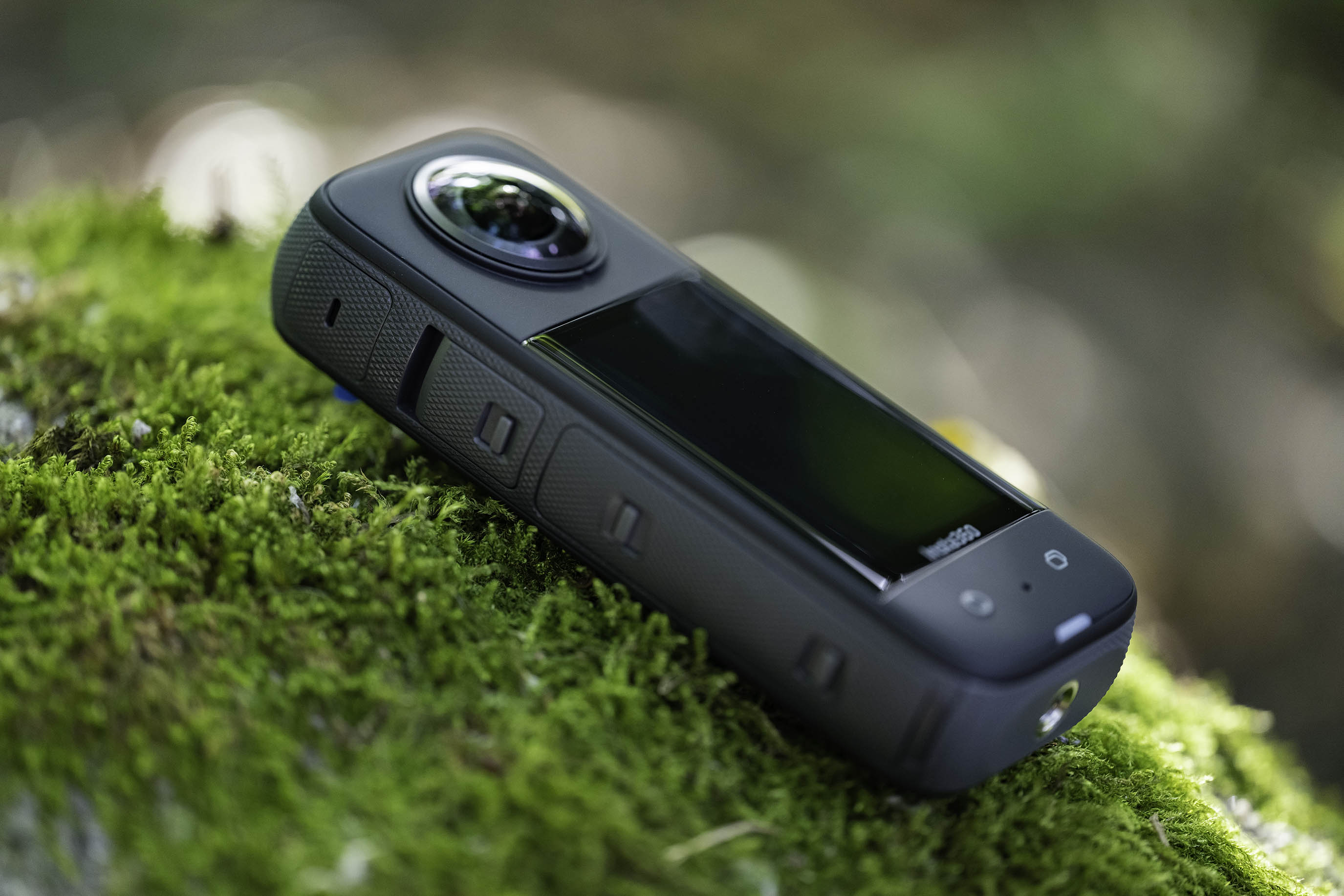 “The Insta360 X3 is a highly versatile camera capable of capturing high-resolution 360 footage.”

Making your videos stand out in an age where millions of people are striving to do the same on platforms like YouTube, TikTok, and Instagram is no easy task. That’s where the Insta360 X3 comes in. The X3 is the latest in Insta360’s line of versatile 360 ​​cameras, and it’s more of an all-in-one solution that’s also compact and waterproof. It’s packed with features aimed at expanding your creative horizons. Can the X3 deliver on its promising potential and earn a place in your camera bag?

The updates to the X3 are immediately apparent, as it now features a big, beautiful 2.29-inch touchscreen on the back. The older X2 camera implemented a tiny little circular display that, while very interesting and usable, is very hard to go back to after using the X3 display. Navigating menus, changing settings and modes, and reviewing footage are SW much easier with a large touchscreen.

The X3 also has more physical buttons, which I really appreciate. It’s way easier now to start and stop recording or to swap between 360 and single lens modes. There’s also a new quick menu button that lets you easily save and access presets. A further improvement is a hatch for the USB-C port. It’s more robust and easier to open or close.

The design of the neoprene sleeve for the X3 has been altered so that there is now a hole that allows access to the USB-C port without having to remove the X3 from the case. Little quality of life upgrades like this are very much appreciated.

Though the X3 is slightly larger than the X2, it’s still a highly compact device that’s easy to fit into most pockets. The small size is great since it makes it more likely that I’ll regularly carry the camera around in addition to my other gear.

The X3 offers a significant boost in image quality over the X2, which is great since disappointing image quality was my one big complaint with the X2. The X3 has a slightly larger sensor and a slightly brighter lens, and the difference is kind of incredible.

The X3 delivers really good-looking video that’s sharp and clean. It can shoot 360 video at 5.7K resolution at 30 frames per second (fps) or 4K at up to 60fps. In single-lens mode, it captures 4K at 30fps and up to 60fps if you drop down to 3.5K resolution. Slow-motion is also available at 4K at 120fps or 3K at 180fps. This means the X3 is an upgrade over its predecessor but doesn’t quite approach the GoPro Hero 10 Black in terms of slow-motion and single-lens resolution.

Due likely to the larger sensor and aperture, the X3 now performs better in lowlight situations. I used it in the dappled forest and still got good-looking footage, though some of the special modes like bullet time need a lot of light to function properly. The video it produces isn’t quite up there with the much more expensive Insta360 One RS 1-inch 360 editionand that camera will still be my go-to as best-of-the-best option for 360 capture, particularly for astrophotography.

The X3 really shines when its high-resolution sensor is put to full use. It can shoot 72MP 360-degree photos and film time-lapses at up to 8K. This makes the camera a great choice for realtors creating VR experiences of properties, or for landscape photographers who want to record a time-lapse while they’re shooting still photos with a DSLR.

The X3 comes packed with a wide variety of specialized modes and accessories for achieving different effects. My favorite of these, as with other 360 cameras, is star-lapse mode, in which the camera captures star trails for incredible cinematic night sky shots. Due to the all-encompassing field of view, you can get the entire sky in the shot, and then pull several different shots out of a single 360 ​​video. I love sticking these star trail shots into travel and adventure videos for a big boost of the “wow factor.”

One very practical new feature of the X3 is a 4K single-lens mode in which the camera uses only one of its two lenses to produce a more traditional action camera-style video straight out of the camera. With this mode, you can choose between the default field of view (FOV), and FOV Plus, which enables a 170-degree field of view for ultra-wide shots, though these wider shots must have 360 ​​horizon lock and flowstate stabilization applied in postprocessing in the Insta360 app or studio.

You can get the entire sky in the shot, and then pull several different shots out of a single 360 ​​video.

The so-called invisible selfie stick lives up to its moniker by completely disappearing in your photos and videos when used with the X3. Over the past year, it has become my favorite selfie stick due to its long reach and sturdy build quality.

I had the opportunity to test the X3 with the bullet time cord accessory, which, when combined with bullet time mode, allows you to spin the camera around you to create crazy slow-motion shots that would otherwise require a highly skilled fpv drone pilot to pull off. This can be really cool, but you really need strong daylight for the 4K 120fps slow-motion video to look good.

Two new modes on the X3 are Me Mode and Loop recording. Me Mode is designed for vlogging or other activities in which you want the video to center exclusively on you. Loop recording continuously records footage, but only saves the last 1 to 30 minutes of the video. One potential application of loop recording is to use the X3 as a dashcam for a motorcycle or bicycle.

Other optional accessories include a quick reader and an external microphone adapter, both of which attach to the USB-C port. Also available is a 3-meter-long extended selfie stick for capturing drone-like shots.

Despite long recording sessions in warm summer conditions, I never experienced overheating with the X3, and it stood up well to chilly nights capturing star-lapse videos. The camera easily shrugged off a dunk in the ocean and put up with rough-and-tumble hiking excursions. I did, however, run frequently into a problem in which the camera would freeze up on me, often during startup, and I had to pop the battery out to get it up and running again. However, it’s important to note that I tested the camera using prelaunch firmware, and the camera never froze while recording.

In terms of battery life, I found that the X3 could get me through an average day of recording on a hike, though, as with most 360 and action cameras, it’s only good for a single star-lapse on a charge. For multi-ay backpacking trips, you’re definitely going to want a few backup batteries.

The camera easily shrugged off a dunk in the ocean and put up with rough-and-tumble hiking excursions.

Insta360’s FlowState stabilization and 360 horizon lock are as impressive as ever on the X3, so it’s easy to capture smooth footage.

The camera is waterproof down to 33 feet, though for seamless 360 stitching underwater (as well as deeper dives), you’ll need to purchase a dive case. If you’re going to use the camera underwater a lot, I’d recommend a dive case anyway, if only for an extra layer of protection. The X3 is fairly rugged and impact-resistant, but as with any 360 camera, you’ve got to be careful of those two bulbous lenses. As I’ve unfortunately experienced in the past, you don’t want these lenses to come into contact with abrasive substances.

Insta360’s mobile and desktop applications are very accessible ways to review and edit 360 footage, plus they offer a plug-in for Adobe Premiere Pro. There are easy options available to simplify the process for novice editors and plenty of depth for seasoned content creators to dig into.

The X3 is available now and retails for $450, which is roughly in the ballpark of a GoPro Hero 10 Black or the DJI Action 2. Though it’s slightly pricier than either of those action cameras, it also offers a greater level of creative versatility. For a 360 camera, the X3 is a remarkably affordable option.

An excellent waterproof 360 camera that won’t break the bank

Insta360 offers an extensive lineup of 360 cameras, yet the X3 still manages to stand out with clear advantages and its own niche. It’s a major upgrade over its predecessor and offers great value for money. Perhaps most importantly, it’s a ton of fun to use, as well as an incredibly versatile tool, thanks to its extensive range of shooting modes and options. As a compact and waterproof all-in-one package, the X3 is easy to carry with you and quick to pull out and start filming.

While the modular RS system that Insta360 also produces is an attractive alternative, particularly with the 1-inch 360 camera attached, the simplicity of the X3 has distinct advantages. The relatively low price point for a 360 camera is also highly appealing, and for most people, the X3 is likely the best 360 camera to choose.