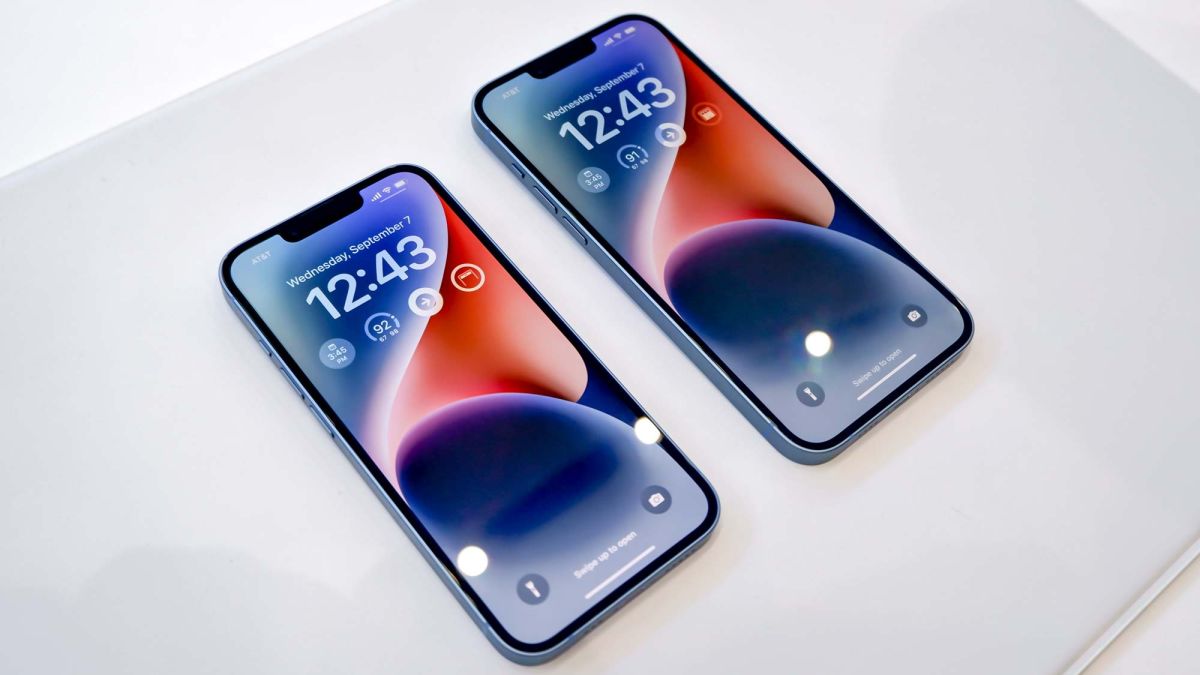 An iPhone 14 vs iPhone 13 comparison should come in handy whether you’re thinking of an upgrade or you just want to know the biggest differences between these two phones. After all, Apple may have just introduced the iPhone 14, but the iPhone 13 remains on sale at Apple’s store for a reduced price.

At first glance, the iPhone 14 looks pretty much identical to the iPhone 13, but there’s plenty of notable upgrades, including a bigger and brighter main camera sensor, safety features like Emergency SOS via satellite and Crash Detection and a slightly more powerful version of Apple’s A15 Bionic chipset.

However, the iPhone 13 has now been discounted and remains one of the best phones around. This iPhone 14 vs iPhone 13 guide will help you decide which phone is better for your needs.

(opens in new tab) up front

(opens in new tab) up front

The iPhone 14 looks very similar to the iPhone 13. Both are made of glass and aluminum with glossy backs. The iPhone 14 has a Ceramic Shield on the front glass for added durability, just like the previous model.

iPhone 13 changed its camera module layout from vertically stacked lenses to diagonally arranged ones on the back. iPhone 14 sticks with that approach. Up front, it uses the slightly smaller notch that was seen on iPhone 13 instead of the Dynamic Island cutout that the iPhone 14 Pro models now use.

Under the hood, Apple has brought some significant changes to the iPhone 14. This includes improving the phone’s thermal performance and a new Emergency SOS satellite feature that will let you get help even when there is no cellular connection.

Apple has also done away with the physical SIM tray on US iPhone 14 models, which means that the iPhone 14 is an eSIM-only phone. So if you want a SIM card tray, the iPhone 13 might be a better choice for you.

The iPhone 14 and iPhone 13 have identical 6.1-inch OLED displays, featuring HDR support, 800 nits of brightness and 1,2000 nits of peak brightness with HDR content. The only difference of note is that you can go bigger if you want with the iPhone 14 Plus, which gives you more real estate with 6.7 inches. This panel fits more content on screen at once and is more immersive for watching videos.

A new iPhone normally means new chipsets, but for the first time in the iPhone’s history, this is not the case for the iPhone 14 and iPhone 14 Plus. Apple has stuck with the high-end A15 bionic that powered last year’s iPhone lineup, though it’s not the exact same silicone that the iPhone 13 used. Instead, this is the same chip found in the iPhone 13 Pro, so Apple is promising an 18% improvement for any iPhone 14 vs. iPhone 13 comparisons.

Looking for new Apple silicone? Try the iPhone 14 Pro and iPhone 14 ProMaxwhich both feature the 4-nanometer A16 Bionic.

As for the iPhone 14 and iPhone 14 Plus, the A15 remains a pretty powerful chip that brings the same 6-core CPU 16-core Neural Engine, but the iPhone 14 now enjoys a 5-core GPU for boosted gaming performance. The A15 Bionic also enables computational photography features like Photonic Engine for better low-light performance.

The iPhone 14 Plus packs a bigger battery and ups those numbers to 26, 20 and 100 hours. That could place the iPhone 14 Plus on our best phone battery life list, though we’ve to put the new handset through our battery test to confirm.

Some of the biggest upgrades included with the iPhone 14 involve its cameras. Like its predecessor, the new iPhone 14 models feature a pair of rear 12MP cameras — one a main camera, the other an ultrawide shooter. But this time, the iPhone 14’s main sensor is much larger with bigger pixels (1.9 microns), and with a faster f/1.5 aperture and sensor-shift image stabilization).

All of this should add up to better photos and video, delivering better detail and less noise. Night mode should also be improved with the exposure now twice as fast. A Photonic Engine feature helps improve low-light performance across all of the cameras.

The front camera on the iPhone 14 has also changed. This new TrueDepth camera has an ƒ/1.9 aperture that is supposed to help in low light. In contrast, the iPhone 13 makes do with an f/2.2 aperture. And you get autofocus for the first time on a front iPhone camera with the iPhone 14 and iPhone 14 Plus.

In terms of video, Apple has introduced a new Action mode that is designed to add better stabilization to videos taken on the go on the iPhone 14.

We will have to see if the iPhone 14 makes it to our best camera phones list, but the early camera specs are promising.

The iPhone 14 brings some upgrades like SOS Emergency satellite connectivity, Crash Detection and improvements in low light photography. Even with those improvements, you’ll still find many similarities to the iPhone 13.

This includes the A15 Bionic chip, the display (with the exception of the larger iPhone 14 Plus model) and the overall design. iOS 16the iPhone 13 will also get all of Apple’s latest software features, including the customizable lockscreen display.

Overall, the iPhone 14 doesn’t seem like a big leap over the iPhone 13. But if you own an iPhone 12 or older handset — or if you want to splurge for the new bigger Plus model — the new phones could be of interest. We’ll update this iPhone 14 vs. iPhone 13 face-off with our test results once we get our hands on the new phones.