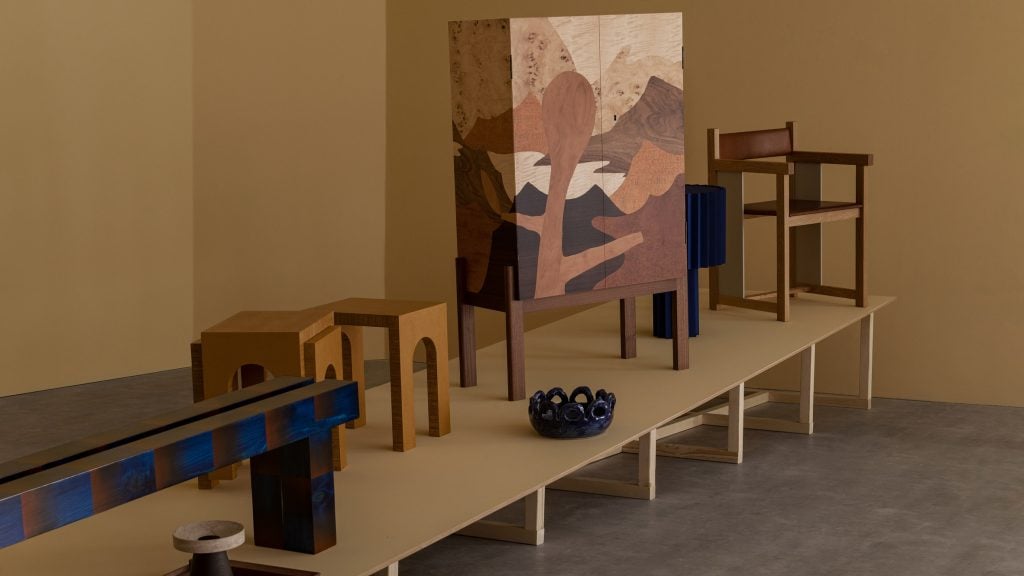 A collection of upcoming designers have pieces shown including a bench constructed from mining waste and brutalist-informed furniture as part of the Moving Forward exhibition curated by Kråkvik & D’Orazio at Stockholm Design Week.

Moving Forward was the official exhibition of Stockholm Design Week and showed works by 42 designers and brands.

Curated by Norwegian stylists Jannicke Kråkvik and Alessandro D’Orazio, who work together as Kråkvik & D’OrazioMoving Forward aimed to showcase small-scale producers, makers, designers and artists who work directly with the materials they use.

“I think in most cases, the material has played a huge part in shaping the actual designs,” Kråkvik told Dezeen. “The connection between the chosen material and the design was quite important.”

The duo collaborated with Stockholm Design Week‘s area project manager, Hanna Nova Beatrice, who helped find some of the Swedish designers in the exhibition.

“Then we knew the Danish, Norwegian and Finnish market and we have a designer from Portugal,” Kråkvik said. “It’s a lot of new names.”

The resulting selection was divided into four sections – one showing more handcrafted pieces in organic shapes, mainly made in wood, one that focused on more elegant and often lacquered pieces, one that featured typical Scandinavian designs that also had a Japanese influence, and finally a section with brutalist-like designs.

Among the pieces on show in the section with lacquered designs was Malmö-based studio Lab La Bla‘s Viper Bench, a long, thin bench made from spruce, copper mining waste, pigment and lacquer. The studio also showed two vases as part of Moving Forward. 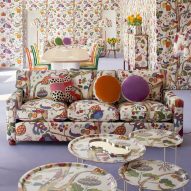 “The bench was actually a prototype for a private commission,” Axel Landström, co-founder of Lab La Bla, told Dezeen. “The vases we had also done before. They fitted in with the theme and were just lying around collecting dust in the studio, so this was the perfect way to showcase them.”

Other pieces on show included a chair and side table made from reclaimed fishing nets from Portugal by Ekbacken Studios. The studio works with local fishermen to turn their nets, which are made from polyamide, into materials that can be used for 3D printing.

In the section dedicated to brutalist-informed designs, the furniture on show included a large pine chair decorated with bright-red paint by designer fredrick paulsen.

The name of the exhibition, Moving Forward, suits the design on show, Kråkvik said.

“With the Scandinavian designs, you can still see and recognize the way we work with materials, but it’s not so typical – it’s moving forward, moving sideways,” she explained.

The exhibition pieces were shown on top of wooden stands, which had been slanted to give a more lively feel to the room. These will be disassembled and the material reused once the exhibition ends.

Moving Forward is on show at NK as part of Stockholm Design Week from 5 September to 11 September 2022. See Dezeen Events Guide for an up-to-date list of architecture and design events taking place around the world.

The photography is by Erik Lefvander.