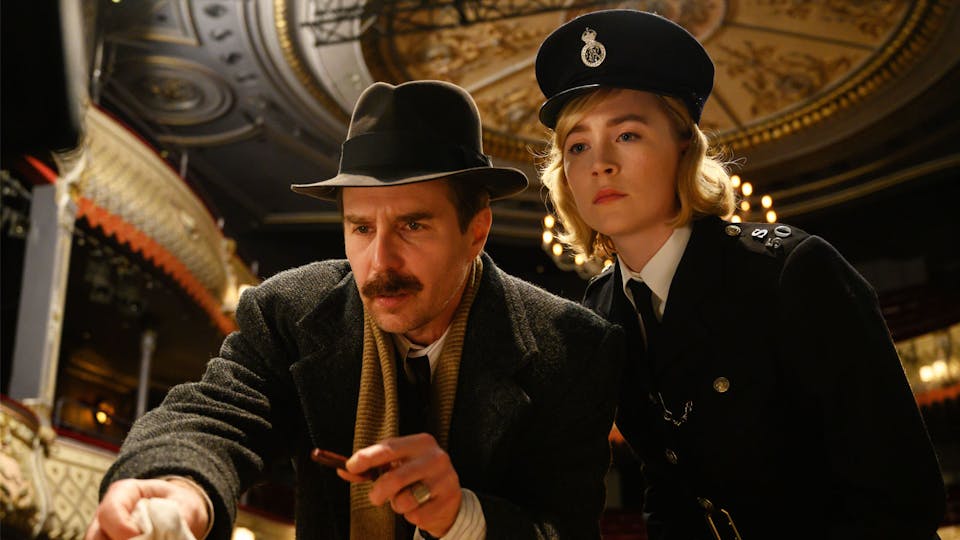 See How They Run is built on a simple but delicious premise: a whodunnit buried inside an actual whodunnit, in this case Agatha Christie’s The Mousetrap. It not only gives Tom George’s film many genres to satirise — it’s a backstage drama, crime potboiler, police procedural all wrapped up in a farce — but it allows for a knowing, self-referential quality that brings the conceits and conventions of the murder- mystery to the fore. It doesn’t completely work, but it’s fast, funny and frequently stylish, topped off with great work by Sam Rockwell and especially saoirse ronan.

Mark Chappell’s screenplay does a nifty job of affectionately embroidering the story’s madcap malarkey with real nuggets pulled from British film and theater lore. Chief among them is the little-known fact that Christie (embodied briefly by Shirley Henderson) inserted a clause into her mouse trap contract that decreed no film version could be made until six months after the play had ended its theatrical run. The detail gives a plausible motive for a host of engaging characters to sabotage either the stage or film version via the murder of movie director Leo Köpernick (Adrian Brodywho also narrates) backstage at the Ambassadors.

The real joy of the film is the rapport between the investigating plods, Sam Rockwell’s cynical Stoppard and Saoirse Ronan’s newbie WPC Stalker.

On the theatrical side we have impresario Petula ‘Choo’ Spencer (ruth wilson), actors Richard Attenborough (a terrific Harris Dickinson, who gets the young Dickie’s voice down pat) and Sheila Sim (Pearl Chanda). Among the movie suspects are mogul John Woolf (Reece Shearsmithplaying the actual producer of The African Queen), his wife Edana Romney (Sian Clifford) and celebrated (read: overrated) screenwriter Mervyn Cocker-Norris (David Oyelow). The cast attack the mayhem with gusto but the whodunnit element ultimately loses its grip, the revelation of the killer less than satisfying.

There’s a knowing, meta quality to the screenplay — a bemoaning of flashbacks as a hoary device crash-cuts to a title-card “Three Months Earlier” — and sometimes it feels too winky-winky. As such, See How They Run works best when it’s leaning into old-school wordplay, visual whimsy and strong gags (“Which part of France are you from?” “Belgium”). Debutant feature director Tom George cut his teeth on lo-fi BBC Three mockumentary This Country — Charlie Cooper shows up as a dimwit usher — but elevates his ambition here. There are shades of wes anderson in the stylization (Grand Budapest Hotel looms large) and hints of Edgar Wright in the emphatic cutting but George makes it his own, neatly evicting ’50s London’s different atmospheres and moving things along at a fair old lick.

But the real joy of the film is the rapport between the investigating plods, Sam Rockwell’s cynical Stoppard (there’s a running joke about coppers named after playwrights) and Saoirse Ronan’s newbie WPC Stalker. Rockwell brings grizzled, Walter Matthau-type charm to the inspector but it’s Ronan who shines brightest as an over-eager, by-the-notebook constable, star-struck by the suspects and taking everything at face value. They make such an enjoyable duo, in fact, that the further investigations of Stoppard and Stalker would be very much welcome.

It works better as a weird relationship movie than a murder-mystery but See How They Run is the whodunnit as hoot, with lots of laughs, oodles of style and played with verve by a quality cast. It also reconfirms Saoirse Ronan as a comedy god.