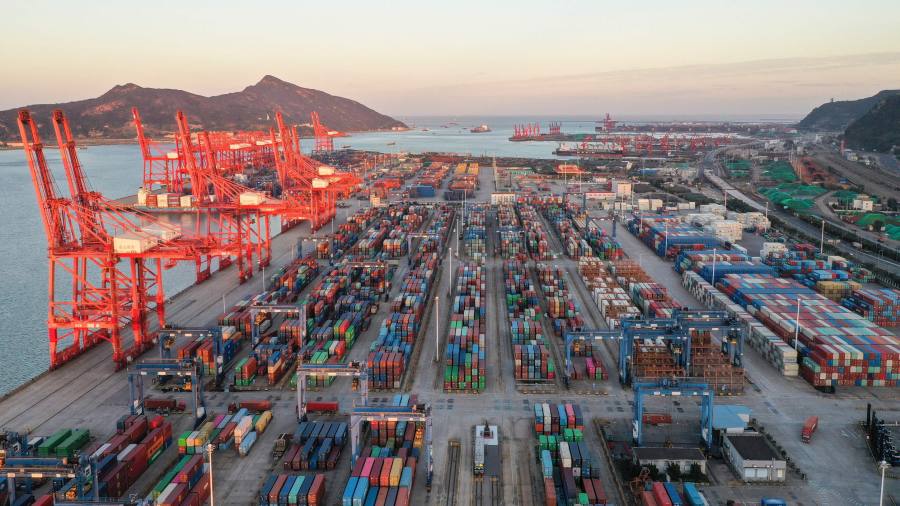 US stocks and government bond prices rose on Wednesday as traders attempted to decipher messaging about the future path of monetary policy against a gloomy economic backdrop.

Wall Street’s broad S&P 500 share index climbed 0.3 per cent in early dealings, while the Nasdaq Composite, which is stacked full of tech stocks that are more sensitive to interest rate changes, was up 0.6 per cent.

In bond markets, the yield on the 10-year Treasury note — seen as a proxy for borrowing costs around the world — fell 0.05 percentage points to 3.29 per cent as the debt instrument’s price increased.

Treasuries had sold off along with UK gilts in the previous session, as investors cranked up their expectations of how far the US Federal Reserve would lift interest rates. The moves became more emphatic on Tuesday after a positive survey on the services industry in the world’s largest economy drove expectations of more aggressive monetary policy tightening.

The improvement in gilt prices came as newly-appointed British prime minister Liz Truss was poised to announce a package this week to alleviate the pressure of soaring energy prices on households and businesses, which some analysts believe could reduce near-term inflationary pressures.

“I think it’s a short-term recovery,” said James Athey, investment director at Abrdn. “In general, the set-up for gilts feels very precarious,” he added, mentioning the Bank of England’s struggle to rein in inflation.

The moves in bond markets also followed a disappointing trade release from China, showing that it had exported less than expected in August. Investors have been scrutinizing such economic data closely in recent months for clues about how far central banks around the world will turn the screws on monetary policy in the face of a protracted slowdown.

In China, exports rose 7.1 per cent last month compared with growth of 18 per cent in July. Economists polled by Reuters had forecast an expansion of 12.8 per cent. The figures were a “sign that slowing global growth and the normalization of consumption patterns is weighing on demand for Chinese goods”, wrote Sheana Yue, China economist at Capital Economics.

A separate report showed that German industrial output had contracted 0.3 per cent on a monthly basis in July, compared with 0.8 per cent growth in the previous month. Economists had anticipated a 0.5 per cent contraction.

The European Central Bank is on Thursday due to announce its latest monetary policy decision. Multiple Wall Street banks have said they anticipate a jumbo 0.75 percentage point increase in borrowing costs. The ECB raised rates in July for the first time in more than a decade, by a sharper than anticipated 0.5 percentage points to zero.

But analysts are divided over how far and fast the ECB will move, with some fearing that higher rates will hit growth in the region. Matteo Cominetta, a senior economist at the Barings Investment Institute, anticipates a 0.75 percentage points rise on Thursday, followed by smaller rises in October and December.

“I think they’ll not be able to do any more than that because as we move into the [autumn] the evidence of a very deep recession will be clear,” he said.

Elsewhere, markets are pricing in the possibility of the US’s Fed raising rates by 0.75 percentage points at its late-September meeting, which would mark the third consecutive increase of such magnitude. The Fed’s current target range stands at 2.25 to 2.5 per cent.

Thomas Barkin, president of the Fed’s Richmond branch, told the Financial Times on Wednesday that the US central bank must lift interest rates to a level that restrained economic activity “until such a time as we really are convinced that we put inflation to bed”.